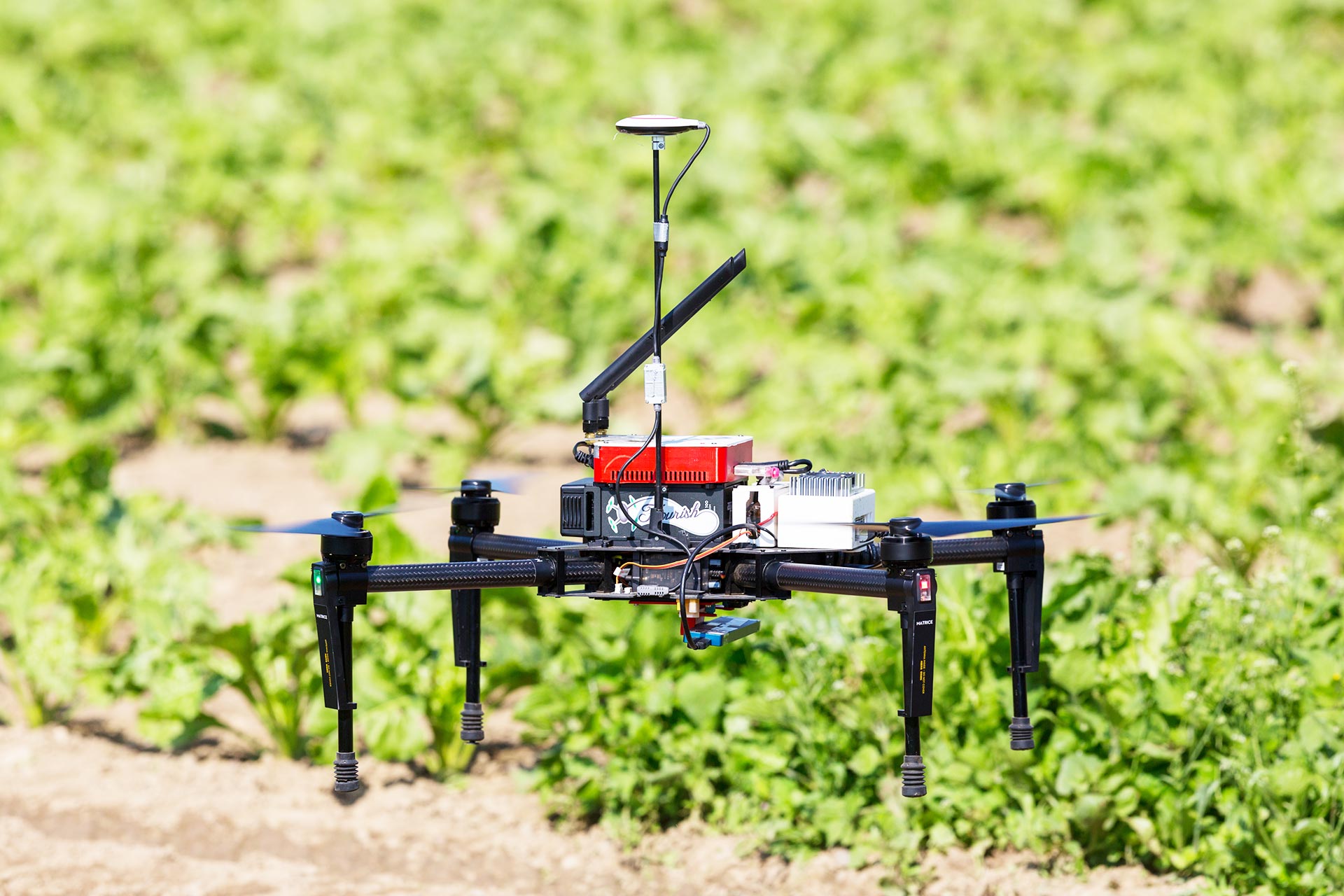 «The drone expands the farmer’s view on his field»

Intelligent devices shall make agriculture more efficient and sustainable. The EU project «Flourish», coordinated by ETH Zurich, developed a work team consisting of a drone and an agricultural robot to control weed in a sugar beet field.

When roboticists and agronomists work together, this is what you get: «Smart Agriculture» and «Digital Farming», «Precision Farming» or «Agriculture 4.0». At ETH Zurich, a group of agronomists and roboticists got together for the EU project by the polysemous title «Flourish». On the one hand, «flourish» refers to plants «blossoming», «growing»and «thriving»; on the other hand, it also means to «flourish»in terms of economic aspects. The research project targets both meanings: It shall make industrial agriculture more ecological without diminishing the yields, as agriculture has to feed a growing global population by means of limited amounts of farmland. «We are forced to develop methods that combine both objectives, that is to produce more food and take care of the environment at the same time,»agronomist Frank Liebisch states. The project group «Flourish»sees the novel method in the alliance between agriculture and information technologies.

Can IT make agriculture more sustainable?

The project group is coordinated by ETH Zurich and consists of scientists from universities in Germany, France and Italy as well as the technology manufacturer Robert Bosch GmbH and an authority of an Italian regional agricultural department. They tinker with flexible robotic solutions that shall help farmers to monitor their fields more effectively and act accordingly. In concrete terms, they develop so-called unmanned aerial vehicles (UAV), also known as «drones», which fly across the farmer’s cropland at altitudes between 10 and 100 metres, collecting data on growth, degree of coverage, biomass, chlorophyll content and other information of the crop sown. This data would supply helpful information to a farmer with vast farmlands about the development of the plants and where, for example, more water is needed or which fertilisation is applied best in which area. In addition, the drone must also be able to distinguish between crop and weed. The data on weed infestation is sent to the agricultural worker, the so-called agricultural unmanned ground vehicle (UGV).This robot sets uncomplainingly and promptly about destroying the weed either mechanically or with the help of a targeted splash of herbicide. This would reduce the use of pesticides; so far, industrial agriculture sprays weed killers across the entire field and hence also onto the future food.

When IT specialists and agronomists work together, they must be willing to familiarise themselves with unknown fields and to learn from each other. «First of all, we had to find a mutual language,»Frank Liebisch says. The three junior researchers participating in the «Flourish»project and the agronomist look at each other and laugh. One can sense that the three roboticists Raghav Khanna (PhD candidate), In Kyu Sa (postdoctoral researcher) and Marija Popovic (PhD candidate) from the Autonomous Systems Lab of ETH Zurich are enthusiastic about Frank Liebisch, who started his career back then with a horticultural apprenticeship. He, in turn, is fascinated by the skills of the three young experts who got a drone to distinguish sugar beets from weeds, among other things. This is why Liebisch is lenient when Marija Popovic talks about the «greens»growing on the fields. By the same token, Marija Popovic explains with great patience to the robotics layman the algorithm that enables the drone to collect data and interact with the field robot.

A drone commanding a field robot is a novelty. The algorithm needed for it was developed by the 25-year-old PhD student from Serbia. Her challenge was to get the drone to fly all by itself above a designated sugar beet field to collect valuable data, which it then communicates to the ground robot to perform interventions. For this, she worked closely with her colleagues Raghav Khanna and In Kyu Sa, both specialists for the navigation, mapping and programming of robots. «The biggest obstacle was nature itself,»the 37-year-old Korean In Kyu Sa observes, who had already examined so-called Harvey robots in Australia. «Inside the laboratory, there is no wind derailing the drone, no temperature fluctuation bothering it, no alternation of sun and shade irritating the eye of the camera. For technologists, nature posed the greatest challenge and opportunities.»The field trials took place at the agricultural research station for plant sciences of ETH Zurich in Eschikon near Lindau. Here, the four researchers made their drone fly time and again across the sugar beet field, here they tested the communication with the field robot, and here they encountered setbacks due to weather conditions. However, they were always heartened by the lunch served at the Strickhof restaurant, freshly made of agricultural produce from the farm itself, as Raghav Khanna lyrically recalls. «After lunch in a canteen, I feel hungry again at 5 pm; back then, dinner was rarely needed. That meal nourished me throughout the entire day.»

The use of pesticides and fertiliser as a trigger

It was the 29-year-old PhD candidate from India who initiated the project some five years ago. In an article, he had read about the threat caused by the use of pesticides and fertilisers in industrial agriculture to human health and the negative effects for bees and soils. «This really stirred me. I thought it was my duty as a scientist to do something against it,»Khanna recalls. For private use, he already owned a drone and he reflected about whether a drone camera could help to apply pesticides and fertilisers only where truly needed. He consulted the ETH Zurich People Search index for someone dealing with agronomy, called Frank Liebisch and only a few days later he had his little drone, equipped with merely a smartphone camera, fly across a field at ETH Zurich. «I was naive, of course, I had no idea that plants could be so diverse and that a photographed green area tells very little about the actual condition of a field or the weed infestations,»Khanna admits. But it was a start, Frank Liebisch thought the idea of the young ETH Zurich student was «cool». About a year and a half later, this inspiration lead to the EU project called «Flourish».

After three and a half years, the project has come to an end. The drone and agricultural robot are now familiar with the sugar beet field. In the future, the collaboration between these two devices shall be expanded to other crops. «We deliberately developed a technology that may be used for various purposes,»Frank Liebisch says. The technology is not yet ready for the market, but that was never the project’s intention. «We conducted basic research; now we need follow-on projects and further field studies.» The algorithm, the construction manual for the «Flourish» drone, is available to the public on the group’s website free of charge. Various agricultural chemistry companies have already indicated interest. Generally, the project has received great feedback, media from all over Europe have reported on this specific example of an IT agriculture. According to Frank Liebisch, an increasing number of farmers, too, are interested in the use of information technologies.

The three young experts were happy to conduct application-oriented research. «It is a good feeling, knowing that I was able to help finding technical solutions for specific problems,»Marija Popovic says. It was her first assignment as a scientist and she can hardly believe the interest expressed in «her»algorithm. «Our success still feels rather surreal.»The collaboration with the partners, the setbacks due to the caprices of nature, the presentations in front of the entire group, the exchanges with other roboticists and, even more, with the agronomists, were tremendously valuable for her development as a scientist. «I have learned very much about agriculture,»she says and looks at Frank Liebisch. «I now know that a plant may have various shades of green and that this has a lot to say about its health condition.»Raghav Khanna, who was worried about the state of our planet, is glad that his initial idea has led to a project dealing with crucial problems. «I like to puzzle over technologies that make a positive ecological and social impact. That motivates me greatly.»

Many questions and problems of IT agriculture remain unanswered at this stage, for example the question of ownership of the data collected: does it belong to the farmer or to the industry that sells and lets the new devices? Or the issue of the growing dependence of farmers on technology and agricultural chemistry groups. Another problem is that a drone and an agricultural robot have a lower operational lifetime than a tractor. A drone has to be replaced after about three years. However, Frank Liebisch is convinced that these problems can be solved. «I believe that technology delivers support in solving the most common and most urgent problems.» Thus, a digitally engineered agriculture opens up new possibilities: «Previously, a large-scale farmer could not oversee the entire area, now the drone expands the farmer’s view on his field.»

Interview with
Frank Liebisch (in German)

The ICT project «Flourish» started in 2014 and lasted for three and a half years. It was coordinated by ETH Zurich and had an overall budget of 4.7 million euros. Participating partners were the Crop Science Lab (Professor Achim Walter) and the Autonomous Systems Lab (Professor Roland Siegwart) of ETH Zurich as well as the University of Bonn, the University of Freiburg and the Bosch Group in Germany, the Centre National de la Recherche Scientifique in France and the Sapienza University and the local agro-food agency ASSAM in Italy.